This year our family participated in a neighborhood garden. We helped prepare the soil, plant, water, weed, and harvest. It was a great opportunity to teach our kids the value of work, get to know our neighbors, and to enjoy the "fruits" (and vegetables) of our labor. The garden produced an abundance of corn, tomatoes, green beans, squash, peppers, cantaloupe, watermelon, and of course, zucchini!

As you probably know, zucchini plants are known for their "heavy yields". Let's just say there was plenty of zucchini to go around! This was more than okay with me because one of my absolute favorite fall treats is zucchini bread.

Saturdays were "picking party" days at the garden. There were several Saturdays that I came home from the garden with a prize zucchini and got right to baking. I shredded the zucchini, measured out what I needed for my bread recipe, and then placed the leftover zucchini in a freezer bag for another baking day.

The bread always turned out delicious, but I was having a slight problem. It wasn't cooking all the way through, leaving a mushy indent on the top of my loaves. I thought maybe I wasn't cooking it long enough, but when I tried cooking it longer, the bottom and edges were too done. One day, I was looking though my trusty America's Test Kitchen Cookbook and randomly came across the answer to my problem. According to my cookbook,

"The problem with (zucchini) when baking is its high moisture content. After shredding, be sure to squeeze the zucchini well to remove as much moisture as possible. A clean dish towel or several layers of paper towels work. If you skip this step, the batter will have too much moisture and won't cook through." 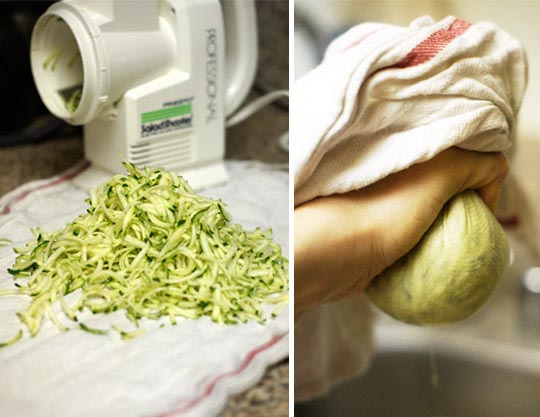 The next Saturday, I put my new knowledge to the test. After shredding my zucchini, I wrapped the zucchini in several layers of paper towels and squeezed. A tablespoon or two of liquid was removed from the zucchini. As you may have guessed, the drier zucchini made the difference. The loaf smelled, tasted, and looked delicious. No more mush! Thank you America's Test Kitchen!