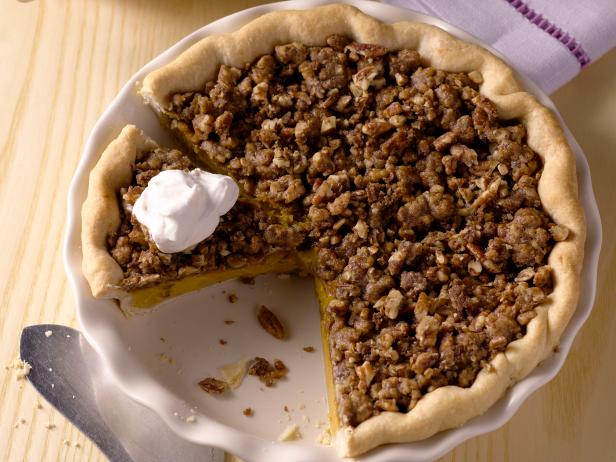 Pumpkin pie with a twist.

To make the crust, combine the flour and salt in a medium bowl and mix well. Break up the shortening and toss it with the flour mixture to coat. Using a pastry blender or your fingertips, mix the ingredients together until the dough forms coarse crumbs. Add 3 to 4 tablespoons ice-cold water, 1 tablespoon at a time, until the dough easily forms a ball that can hold itself together. Cover in plastic wrap and refrigerate for at least 30 minutes and as long as overnight.

While the dough is resting, make the streusel: Toss the pecans with the brown sugar, flour, and cinnamon in a medium bowl. Add the butter, and using a pastry blender or your fingertips, work in until you have small clumps. Set aside.

Preheat the oven to 425 degrees F.

Sprinkle flour generously over a hard surface and roll the dough out with a rolling pin until it forms an 11-inch round. Fold the round in half, place it in a 9-inch pie plate, and then unfold the dough to completely cover the pie plate with a bit of an overhang. Tuck the overhang under to make a double-thick rim, and then use your fingers to crimp the edges of the pie shell. Brush the heavy cream over the crimped edges, and refrigerate until the filling is complete.

To make the filling, mix the pumpkin, flour, brown sugar, nutmeg, cinnamon, and salt together with an electric mixer on medium speed until smooth, scraping the sides of the bowl well. Add the heavy cream and maple syrup, scraping the bowl several times while mixing. Mix in the beaten eggs.

Cool the pie on a wire rack. The pie is best served at either at room temperature or cold. Before serving, garnish the pie with the Maple Whipped Cream.

Place the metal bowl of an electric mixer in the freezer to chill for at least 15 minutes.