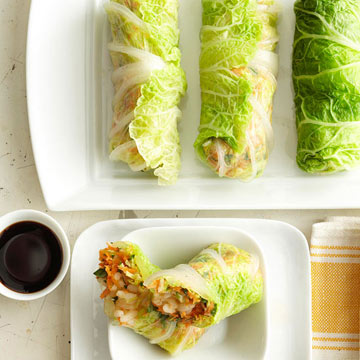 These are so delicious and healthier than using egg roll wrappers.

For rice: In a medium saucepan, bring 1 cup water to boiling. Slowly add rice and return to boiling; reduce heat. Simmer, covered, about 15 minutes or until most of the water is absorbed and the rice is tender. Remove from heat. Let stand, covered, for 5 minutes. Uncover; let rice cool.

For wrappers: In a large pot, bring 12 cups water and the 1 tablespoon sea salt to boiling. Meanwhile, place the ice in a large bowl with 8 cups cold water.

Remove eight outer leaves from cabbage. Make a cut through each leaf at the base, trimming out some of the woody stem. Set the remaining head aside.

Carefully place trimmed leaves in the boiling water for 30 to 60 seconds or until just wilted, then transfer them to the ice water for 60 seconds. (Tongs are the best tool for the job.) Remove leaves from cold water one at a time, and lay flat on a cloth towel. Set aside to dry.

About one hour before serving, assemble rolls. First, squeeze out any excess water from the filling. Then lay a blanched cabbage leaf flat on the counter with the base end toward you. Place 1/4 cup of the filling in the center of a leaf; place 2 tablespoons of rice on top of the filling. Fold stem end and sides over filling and roll up tightly, taking care not to tear. Place on a serving dish, seam side down. Let sit for about an hour. If you like, cut each roll in half diagonally to reveal the filling. Serve with soy sauce for dipping.

To serve, if you like, cut each roll in half crosswise on a diagonal to make 16 pieces. Serve with soy sauce or teriyaki sauce.