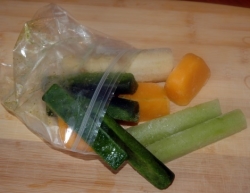 After bringing in a large bowl of cucumbers from the garden, I was in a dilemma as to what to do with so many, besides give them away. Pickles you say! Nah, I have no desire to make pickles. I like store bought pickles just fine. I do, however, love cucumber in my green drinks so I decided that after I cleaned the soil off, I would run them through the blender, peel and all. After I had a nice light green cucumber puree, I then froze the puree in ice cube trays. When they were thoroughly frozen, I popped them out of the trays and put them in a zip lock freezer bag.

Sometimes, at our house, fruits and vegetables start to go bad before I have the chance to use them. It makes me feel so wasteful! So, I've started making and freezing a variety of fruit and vegetable puree and placing them in zip lock baggies. I put all the ingredients, except for the water or milk, into one baggie that I want in my green drink so it's ready for use at a later day. I now have everything I need for my green drink in individual packages. This process makes for a convenient and fast smoothie. A speedy delivery!

I put four cubes of pureed frozen spinach, two cucumber cubes, three mango cubes and one frozen banana in a baggie to make an individual packet. To turn this into a smoothie, add two cups of water to the blender and the frozen ingredients, one cube at a time so as to not overwork the blender, and blend until smooth. 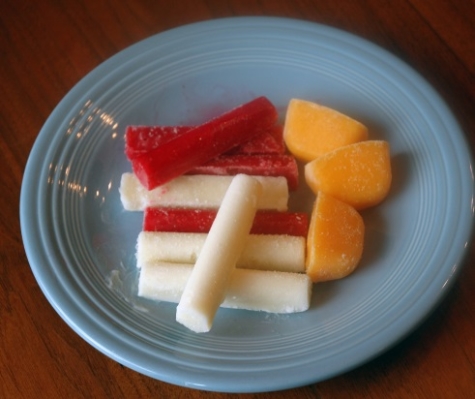 Tip: Almost, all fruits and vegetables need to have a little water added to them when making a puree.