Desserts To Die For

I just made the BEST CHEX MIX EVER! I thought it was so tasty. I think you might have seen this one recently, but I decided to make it and just had to share it with you. It has every thing good you have ever tried mixed into one bowl. Hallelujah!

We were having a movie night and I had to bring a treat to share. I knew I would be a little stressed for time. I was worried at first to make this because it seemed a little involved, but don't get worried! It was just a matter of pulling out a few bowls and melting a few things.

You can easily use this as a gift. I have already decided I'm probably going to get cute cellophane bags and make this stuff to give out at Christmas time. It's pretty and I haven't met anyone who doesn't like it. It's bascially a lot of chocolate and caramel. So it's pretty easy to like. I like that it makes a lot but doesn't take a lot of time or effort. Don't we need more of that in the holidays?

Better than Almost Anything Chex Mix 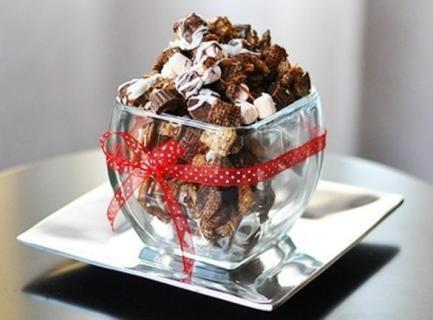 Directions Step-By-Step 1 Into large microwavable bowl, measure cereal; set aside. Line cookie sheet with waxed paper or foil. In 2-cup microwavable measuring cup, microwave brown sugar, butter and corn syrup uncovered on High 1 to 2 minutes, stirring after 1 minute, until melted and smooth. Stir in baking soda until dissolved. Pour caramel mixture over cereal, stirring until evenly coated. Microwave on High 3 minutes, stirring every minute. Spread on cookie sheet. Cool 10 minutes. Break into bite-sized pieces. Make sure Chex mixture is cool to the touch (so candy doesn't melt.) Evenly sprinkle mini peanut butter cups candy and miniature marshmallows over Chex mixture. In small microwavable bowl, microwave caramel baking bits and cream uncovered on High about 1 minute or until chips can be stirred smooth. Use a spoon or fork to drizzle over snack. Microwave the milk chocolate baking chips next, starting with 20-seconds and stirring, then at 20 second intervals until the mixture is completely smooth (microwave temps vary, so watch the chocolate and stir frequently until it's of drizzling consistency). Drizzle over the snack mixture. Then microwave the vanilla (white) baking chips in 20-second intervals, stirring until smooth, and drizzle that over the snack mixture. (Note: The vanilla and milk chocolate chips should not need cream added.) Quickly sprinkle coarse salt over all while candy drizzles are still wet. Refrigerate until set. Break apart and store in tightly covered container. Perfect for gift giving! 2 DESSERT IDEA: Create parfait desserts by layering Chex mix and lightly sweetened whipped cream!