Top Articles: Flambé or No Way? Substitutions for using Alcohol in Recipes

I have always wondered exactly how much alcohol cooks out when making those yummy pasta sauces, succulent roasts, and even desserts. As a very pregnant mama I was crazy about watching what went into my body. I found out how challenging this could be when my spouse and I went on a babymoon (you know the last hurrah as a couple not toting a diaper bag) early on in my last pregnancy, and the cruise ship dinners were laced with delicious sounding, though alcohol tainted recipes. Normally, I would just assume that most of the alcohol had cooked out, and just gone whole hog, however, having little peanut consuming everything I consumed, I couldn't even bear the thought of it.

As a mother, I will also be watching every food, drink and bug he decides might be edible. So, that got me thinking, how much of that alcohol really cooks out? How much stays in the food? How hot does the temperature need to be to actually get that alcohol out? Knowing that I can't be the only one concerned about this, I set out on a mission to figure out some of these facts. I felt that this was important, not only for dining out, but for doing my own cooking at home when recipes call for wine or alcohol. Of course, there is always the option to just not use that recipe, but even I have found that my famous roast recipe, calls for a wine deglaze.

How much alcohol cooks out depends on how much alcohol is used, how hot the cooking temperature is, and even what type of alcohol or liquor is used. Many people believe that all the alcohol put into a recipe is cooked out. After some research, I found this to be false.

The following chart helps explain how much can be cooked out when using certain preparation methods. Alcohol retention will still depend on the quantity used. Looking at this chart, we can see that in order to get the alcohol down to a low percentage for those sensitive to alcohol, the young, or those ethically or religiously sustaining from alcohol, sauces such as pasta sauce must be simmered for a LONG time, longer than I would have ever imagined. 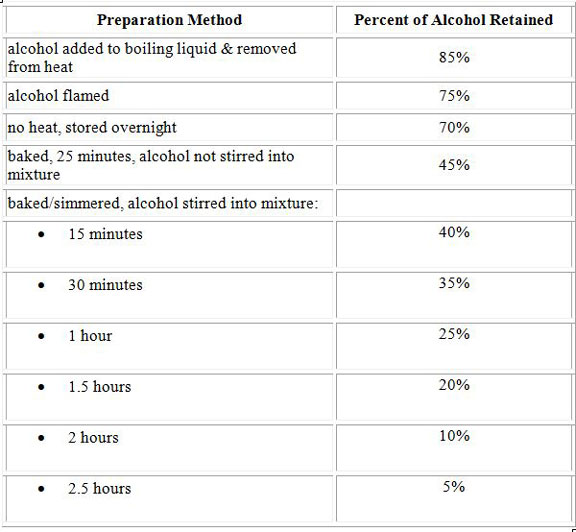 Finding out this information made me question, do I really even need it in recipes at all? This of course is a personal preference, and substitutions may alter the final taste of a recipe, but for my family, I started looking into other methods of getting the same flavor without the alcohol content. I found this amazing chart on about.com that helped me understand some simple substitutions for recipes requesting alcohol.

I will be honest here, I didn't know what some of these alcohols were. Funny side story, a friend of mine, who abstains from using alcohol for religious convictions spent some time working in Wales, she called once telling me that she had this yummy mint pie and that we needed to find the recipe when she got back to the States... well, you guessed it... and she was shocked when I told her to check the ingredients, as her yummy mint was likely Bailey's alcohol, sure enough, she had been unknowingly consuming Bailey's for weeks. This list is relatively comprehensive, though the most used alcohols in cooking are Vodka, Red and White wines, and Sherry. 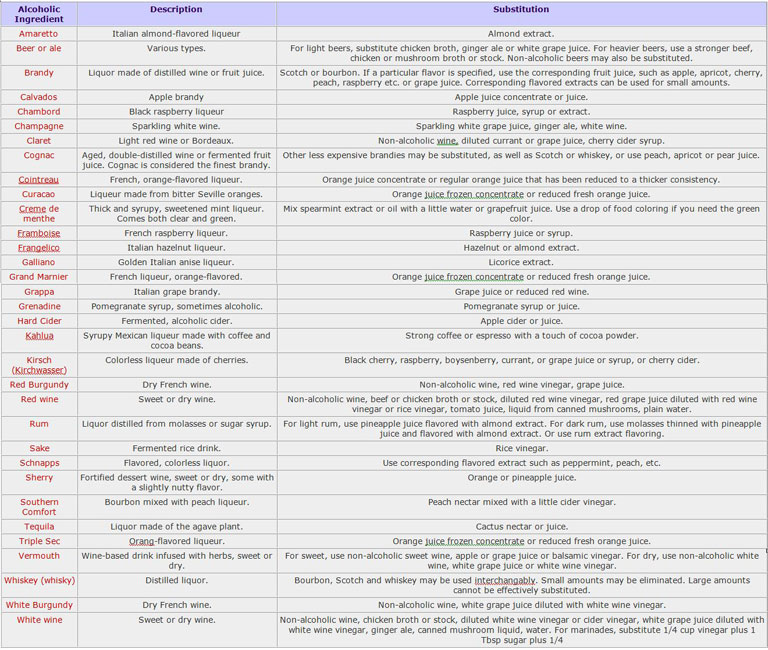 I have personally used several of these substitutions and haven't found the taste to be lacking at all. Although there are some differing opinions on how much is or is not cooked out, I would rather err on the side of caution until I can be 100% certain that there is no alcohol left after I cook. I hope this helps you if you are looking for some substitutions in your own cooking. You can also use the Cook'n software to find recipes that don't call for alcohol, and save them to your own cookbooks!

This Top Articles: Flambé or No Way? Substitutions for using Alcohol in Recipes recipe is from the 2013 HomeCook'n Collection Cookbook. Download this Cookbook today.