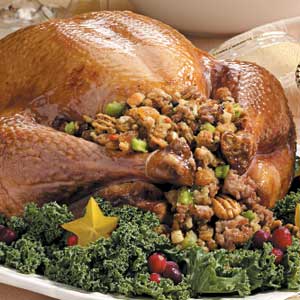 If I ever have anything to say about it, the Holiday ‘bird’ will always be stuffed! It is hands down superior in taste to casserole stuffing.

Cooking your stuffing inside the Thanksgiving turkey gives it an unparalleled flavor and texture. As the bird roasts, the juices are absorbed into the stuffing, resulting in a savory, moist, delicious mixture that’s hard to achieve any other way.


DON’T stuff your turkey if:


Now the best tip of all for stuffing a turkey!

Removing stuffing from the turkey cavity can get complicated—and messy. Here is my expert foolproof tip: Use a cheesecloth!

Line the turkey cavity first with a cheesecloth that’s been folded in half, then fill it with stuffing. Then when the turkey is done, it is so easy to pull out the cheesecloth and all of the stuffing comes out in one quick motion. There are also cheese cloth bags that you can now purchase to place your stuffing in, that makes for stuffing the bird quite simple.

This Refrigerator Door: Foolproof Tips for Stuffing a Turkey! recipe is from the 2013 HomeCook'n Collection Cookbook. Download this Cookbook today.