Recipe from the March 2012 Newsletter

Salt chicken breasts on both sides, then place in an ovenproof dish. Pour BBQ sauce over the breasts and turn them over to coat. Bake for 20 to 25 minutes, or until chicken is done.

Remove from oven and cut into a fine dice. Set aside.

Roll/stretch out one pizza crust. Lay it on a sheet pan drizzled with olive oil. Drizzle a little olive oil on the crust, then sprinkle on a little salt.

Spoon a couple of tablespoons of extra BBQ sauce on the crust and spread it evenly. Top sauce with half the sliced mozzarella. Sprinkle on half the diced chicken and thinly sliced red onion.

Sprinkle again with a little salt, then bake for 15 to 17 minutes, or until crust is golden brown and toppings are bubbly.

Remove from the oven and sprinkle on plenty of chopped cilantro. Cut into squares and serve immediately. Repeat with other crust and other ingredients, or save for another time.

Be sure to check the Cook'n Recipe Archive for more recipes. 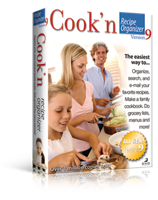 Be sure to check the Cook'n Recipe Archive for more recipes.
Piles of recipe cards in your drawer? Download Cook'n today and get organized!

Buy the CD or download of Cook'n right now! Includes over 300 of our best recipes.

"I might learn how to cook yet with all this software of yours. You can't believe how much it has helped. I've had friends come over (I'm just a single guy with a dog - but looking for the right woman) and rave about the meals I prepared for them. It's not all that hard if you just follow the directions. In the end I have to tell them my secret, it's not talent - it's your software.

Oh well, the food is still delicious. Now if I could just figure out how to use the dishwasher.