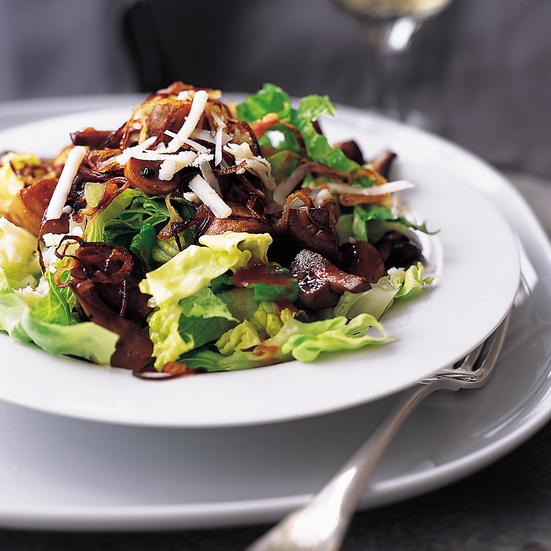 Warm salads used to be common on restaurant menus, but their popularity has waned, for no good reason. This terrific salad is made with warm mushrooms that develop great meaty flavor when cooked with soy sauce.

Dovetailing tip: Replace the Romaine and Boston lettuce with your prewashed salad mix from Meal 1.

In a small bowl, whisk the extra-virgin olive oil with the sherry vinegar, Marsala, tomato paste and minced garlic. Season the sherry vinaigrette with salt and pepper.

Add the remaining 1 teaspoon of pure olive oil to the skillet. Add the shallots, cover and cook over moderate heat until softened, about 3 minutes. Uncover and cook, stirring, until lightly browned. Stir in the sherry vinaigrette and remove from the heat.

In a bowl, toss the lettuces. Add the mushrooms and shallots and toss well. Arrange the salad on 6 plates, sprinkle with the cheese and serve at once.