Piping hot clam chowder served in a crusty sourdough bread bowl may have had its start on San Francisco's legendary Fisherman's Wharf, but it has since become a fashionable choice in restaurants throughout the United States. As the dish's popularity grew, so did the culinary uses of bread bowls. Not just for chowder anymore, these hollowed-out rounds serve as beautiful party centerpieces filled with luscious dips and mouthwatering spreads. They are also chic edible vessels for salads, appetizers, entrées, and even desserts. Now, gourmet cook John Vrattos and best-selling food writer Lisa Messinger have created an easy-to-follow, fun-to-use cookbook to help you get started preparing and serving meals in this unique way. 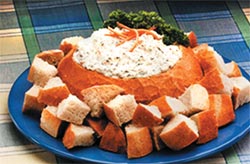 Whether you're using sourdough or pumpernickel, and whether your loaf is out-of-the-oven fresh or store-bought, John and Lisa begin by showing you the simple method for hollowing out a bowl that is both beautiful and functional. What follows are over 100 sumptuous kitchen-tested recipes, ranging from traditional dishes such as Fisherman's Wharf-Style Clam Chowder to innovative creations like Teriyaki Chicken Bowl and Warm Baja Shrimp Taco Dip. Throughout the book you'll also find outstanding bread bowl recipes developed by top restaurant chefs who have honed their culinary skills at such restaurants as the famous Scoma's on Fisherman's Wharf and the prestigious Tadich Grill-San Francisco's oldest eatery.

Whether you're hosting a Super Bowl party, preparing a meal for the family, or simply cooking an intimate dinner for two, make your event a little more special with a selection from The Sourdough Bread Bowl Cookbook.