NOTE: You must have Cook'n installed to use this download!

At last a cook book with recipes and tips and directions on using large Dutch ovens and cooking for crowds. Cooking for crowds is the easy part; just make a recipe as many times as needed to feed everyone, with enough Dutch ovens to cook each course in. Cooking for crowds in BIG ovens is a completely different ball of wax all together. There is no system on counting coals or otherwise for temperature control and there are very few recipes that will feed a crowd cooked in a BIG oven. When I mean big I'm speaking of any Dutch oven that is 15 in diameter and larger, up to the massive Maca 22, weighing in at 160 pounds empty. 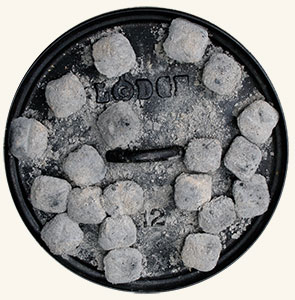 As a retired chef, I am familiar with cooking in large quantities but, I had to learn on my own about cooking in BIG Dutch ovens because there are not any cook books that address the matter of BIG ovens and cooking for Crowds. Although, many of the recipes in this book are written and tested in BIG ovens; you will also find some recipes that cover large groups of people but still use the most popular Dutch oven sizes of 10 to 12 inches. The method of cooking in many ovens for a group is how Coleen Sloan, my dear friend and I cooked for the 2002 Winter Olympics Games in Salt Lake City. The method works well but takes many ovens and people to help manage all the ovens. Using BIG Dutch ovens cuts down on the help needed to manage meal preparation and service and the number of Dutch ovens used. A perfect example of cooking in BIG ovens is at the Carson City Rendezvous when 60 to 100 people are served prime rib, baked potatoes, a side dish and desser all cooked in only 4 to 6 Dutch ovens. Whereas, it would take as many as twenty to thirty 12 Dutch ovens for the same meal to feed the same number of people./p>

This book has taken much longer to complete because all the recipes assembled within these pages have been tested after being written; then tested after changes were made until the desired result was achieved. I am very proud of what has resulted including the tips to using BIG ovens including heat control, preparation tips, measurement conversions, etc.

Cooking in a Camp Dutch oven or "Covered Wagon" is not complicated and can be easily mastered by any person who enjoys food at home and at the camp site, including cooking in BIG ovens. All you need to do is be familiar with your heat source and more importantly comfortable with the recipe which you are cooking. Remember, don't try a new recipe at camp, practice it at home on the stove or in the oven first then try it in the Dutch oven, then at last, try it using charcoal in your back yard. Remember no matter what you are cooking in your Covered Wagon or Camp Dutch oven you need to PRACTICE, PRACTICE, PRACTICE!! Keep your coals hot and may your ovens never cool! 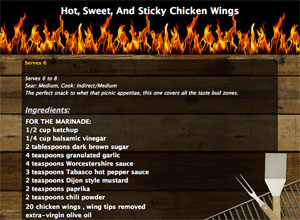